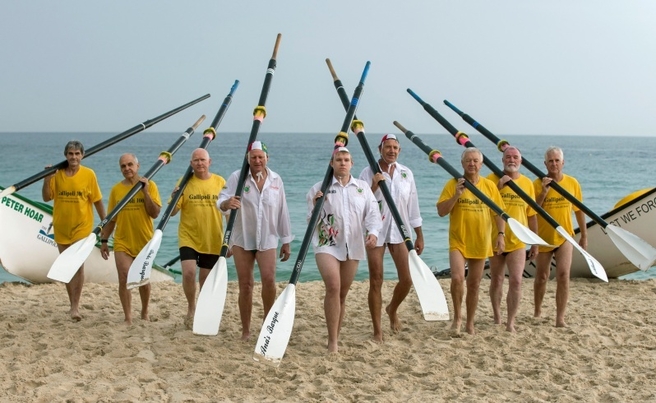 It will be a sight sure to stir the emotions just before next year’s centenary of the Anzac landing at Gallipoli.

A small flotilla of surf boats rowed by crews from Australia, New Zealand and Turkey will cut through the water in front of those unmistakable hills and ridges high above Anzac Cove.

Among them will be crews from Cottesloe and Trigg Island surf life saving clubs.

The event, Gallipoli 100, starts on April 22 from Morto Bay, on the east of the peninsula near its southern tip.

The boats will travel in several legs, allowing crew changes, around the peninsula and then north past Anzac Cove, to near Fisherman’s Hut.

The next day the route will be reversed, covering a total of about 60km.

For the Cottesloe crew, it will be particularly poignant. Cottesloe was WA’s first surf life saving club and among the first in Australia when it was formed in 1909.

Within five years Australia was plunged into World War I and among those who served were 46 members of the Cottesloe Surf Life Saving Club.

Their names are preserved on an honour board in the clubrooms. A small star next to the names of 10 club members indicates those who did not survive the carnage.

The Cottesloe boat will carry inside its bow section the 46 names on the board.

The crew is also investigating acknowledging in the boat all the WA men who served at Gallipoli.

Mike Franz, who at 55 will be the youngest in the Cottesloe boat, has family links to the war.

His great-uncle Eric McKenzie served in the 44th Battalion and was awarded the Military Cross, and also served in World War II.

Mr Franz’s grandfather Cecil Fraser was in a field artillery brigade in WWI.

A life member of the club, Mr Franz said he got goosebumps thinking about what the event commemorated.

Cottesloe crew member Tom Locke said that as a clinical psychologist he came into contact with the veteran community through work.

“They mean a lot to me,” he said. “I wanted to do something as a mark of respect.”

The Trigg Island club was formed in 1953 and its team also has WWI links.

Team manager Vanessa Barby said her grandfather John Wilson had enlisted in WWI as a member of the 8th Light Horse regiment.

He had been wounded and repatriated to Australia twice and each time had returned to action, and her family links had inspired her to be part of the event. “How could you not go,” she said.

Among those in the Trigg crew are Rod Bennett and his son Tim, 19. Rod Bennett said he always found Anzac Day very emotional. “I’m just a sentimental guy,” he said.

Boats taken to the event from Australia will be donated to Turkish clubs to promote surf life saving, and the participating crews are on the lookout for sponsors.

Via: The West Australian