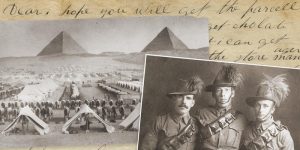 As part of the 2014-2018 WW1 centenary, Australia will be commemorating in a very big way the 100th anniversary of our first great battle victory in WW1 – the colourful Australian Light Horsemen’s cavalry charge at Beersheba, Palestine, when these brave horsemen galloped across the desert against German and Turkish heavy artillery shells, machine gun and rifle fire jumped the trenches and captured this enemy stronghold with its vital water supplies.

This victory was a courageous coup for the young Australia even if their jealous ‘comrade in arms’ Lawrence of Arabia quipped, “These sporting Australians saw the campaign as a point-to-point with Damascus as the post, which the best horse would pass first”

Peaking with that legendry cavalry charge at Beersheba, led by General Harry Chauvel this exciting film tells the story of Australia’s romantic Light Horsemen winning bloody battle after battle in the harshest of deserts to drive the Turks out of Palestine and end WW1 in the Middle East – and it is told in the brutally honest words by the last Horseman interviewed before he died – Len Hall of the famous 10th Light Horse Regiment of Western Australia

As an Historian keen to capture the stories on film of all Australia’s remaining veterans in the late nineteen nineties before they died, Dr. King was especially keen to interview this famous veteran, Len Hall of the 10th Light Horse Regiment – whose story was one of the most colourful of all returned servicemen.…. buy tickets here