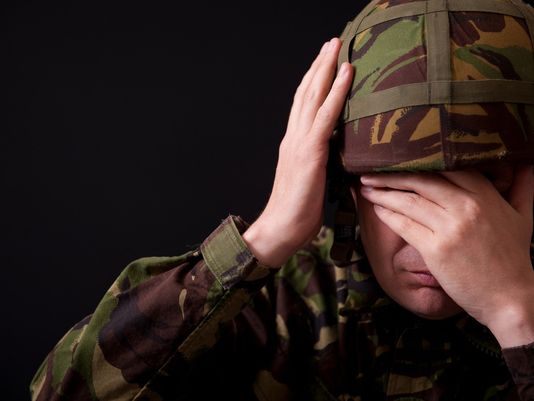 NEW BRUNSWICK – According to the Department of Veterans Affairs, an estimated 22 veterans in the United States commit suicide every day. On March 31, 2011, Clay W. Hunt, a decorated Marine Corps veteran, was one name behind that number. The 28-year-old had been honorably discharged two years prior; he then spent the time leading up to his death battling red tape in seeking the mental health care he needed to treat his post-traumatic stress disorder through the VA.

On Feb. 12, President Barack Obama signed into law The Clay Hunt Suicide Prevention for American Veterans Act. The legislation — designed to help the VA employ new strategies for suicide prevention and bolster recruitment efforts to attract more psychiatrists to work with veterans — is being lauded as a significant step in addressing the mental health issues of service members transitioning to civilian life.

Present at the signing was Maj. Gen. Mark Graham (retired), who, during his U.S. Army tenure, advocated for increased access to mental health services to curb the spike of suicides among active duty military personnel. Today, Graham serves as the senior director of the Rutgers University Behavioral Health Care National Call Center, which operates multiple 24/7 peer support helplines for the military, veterans and their families: NJ Vet2Vet, 866-838-7654; Vets4Warriors, 855-838-8255; and Vet2Vet Talk Line, 855-838-7481.

Rutgers Today spoke with Graham about the significance of this new law in improving mental health care for veterans.

RUTGERS TODAY: What are the challenges veterans historically have faced in receiving treatment for mental health?

GRAHAM: The top issues are access to timely care and eliminating the stigma that surrounds anyone seeking treatment for their mental health. They go hand-in-hand. We need more mental health professionals and services; a veteran can’t wait months to receive care. The new law will pave the way to increased accessibility and acceptance of those who pursue treatment.

RUTGERS TODAY: What are the most important changes that will occur as a result of the Clay Hunt SAV Act?

GRAHAM: The legislation opens doors in areas where the VA needs assistance most. It addresses the VA’s staffing deficiencies by providing reimbursement for tuition and expenses to those studying psychiatric medicine who want to work with veterans — making it easier for the VA to recruit. It will further increase access to care by creating a peer support and community outreach pilot program and an interactive website of resources for veterans.

The law also requires an independent annual review of all VA suicide prevention programs to identify the most and least effective initiatives. This will allow the VA to better channel its resources to the most effective programs.

RUTGERS TODAY: How does peer support and community-based care play a role in the success of the law?

Graham: The peer support component is important to initiating the process of getting veterans to where they can receive care. Veterans are more open to voice concerns over their mental health and other challenges if they are speaking to a peer. We see this every day on our helplines. Peers listen and work with the veteran.

The law also allows the VA to work with nonprofit mental health organizations to help manage patients at risk for suicide. Public-private partnerships are essential. We need to get the communities that these veterans live in to be more involved in providing care. In some cases, veterans live in remote areas where community-based care is more accessible than traveling to a VA facility.

RUTGERS TODAY: Clay Hunt had struggled to receive treatment for PSTD for years before he took his life. Besides increased access to care, what barriers can be eliminated to ensure that veterans receive a timely diagnosis and treatment?

Graham: An obstacle is that PTSD — or any mental health condition — is an invisible injury. When service members return and they’re struggling mentally or emotionally, some people think they are making it up. But how is this different than if the veteran sustained a back injury? That is also invisible, yet we wouldn’t question the validity of pain. America can eliminate this stigma and by doing so, save lives every day.

We should not question people; we should trust what they are telling us. We should listen, get them efficiently to the resources they need, and then allow the medical professionals to determine the severity of the injury. The Clay Hunt SAV Act puts into motion this chain of treatment.

RUTGERS TODAY: Hollywood gave a nod to the issue of veterans’ mental health and the difficulties they face transitioning to civilian life during the Academy Awards with Crisis Hotline: Veterans Press 1, which won for best documentary short subject, and American Sniper, which received one award and six nominations. How have films such as these raised the public’s consciousness about the challenges faced by returning veterans?

Graham: These films are a call to action for our nation. They are essential in raising awareness to the issues our veterans face as they reintegrate back into communities.

NJ Vet2Vet, 866-838-7654, is sponsored by the New Jersey Department of Military and Veterans Affairs for veterans who live in New Jersey; Vets4Warriors, 855-838-8255, is sponsored by the United States Department of Defense for active duty service members, National Guard and reserves and their families; and Vet2Vet Talk Line, 855-838-7481, sponsored by the VA, provides 24/7 confidential peer support, information and referrals for veterans and their families. Every call is answered by a veteran who understands the rewards and challenges of military service and is trained to provide compassionate and caring peer support along with access to a wide array of services across the nation.