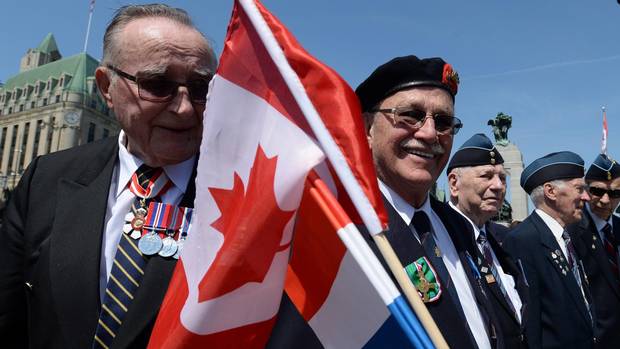 Veterans who fought during the Second World War marched through the streets of Ottawa today, in commemoration of the 70th anniversary of Victory in Europe Day.

The march, one of several events being held across Canada and throughout parts of Europe, was followed by a ceremony at the National War Memorial.

More than 45,000 Canadians died during the war.

Veterans Affairs Minister Erin O’Toole spoke at the ceremony, urging all Canadians to pause and remember the sacrifices made by Canadians and Newfoundlanders in liberating the Netherlands.

Several rows of veterans sat in the warm sunshine as a violinist and youth orchestra from the Netherlands played a sombre tune, the theme song from the film “Schindler’s List.”

Prime Minister Stephen Harper issued a statement to mark the anniversary, calling it a day to pause and honour the more than one million Canadians who served to end tyranny on Europe.

“They did so to protect the values of freedom and democracy that Canadians hold so dear, and because it was the right thing to do,” said Harper, who earlier in the week attended ceremonies marking the liberation of the Netherlands.

Liberal Leader Justin Trudeau called the unconditional surrender of Nazi Germany and the end of the Second World War in Europe 70 years ago a milestone for Canada.

“We take this opportunity to pay tribute to our Canadian veterans who served so bravely, and who made the ultimate sacrifice so that we could continue to live in peace and freedom,” said Trudeau.

Parliamentary Secretary Rick Dykstra was in Germany on Friday, on behalf of the federal government, to help close a week of commemorative events surrounding the VE Day anniversary, where he and other delegates took part in a wreath-laying ceremony at the Reichswald Forest War Cemetery.

Via: The Globe and Mail