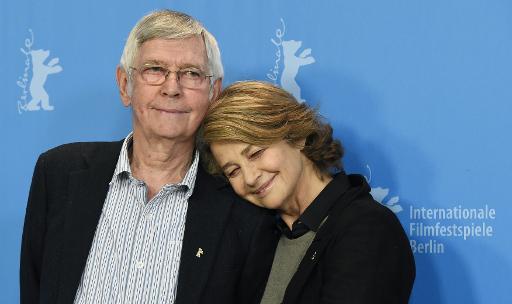 Berlin (AFP) – The race for the Golden Bear top prize at the 65th Berlin film festival wound up in a dead heat Saturday, with break-out talents looking well placed to pip cinema heavyweights.

Ahead of a gala awards ceremony for the Berlinale, as the 11-day event is known, a slow-burn British drama about a foundering marriage and a banned Iranian picture emerged as favourites.

Britain’s Charlotte Rampling stars in the independent movie “45 Years” as a woman whose husband learns the body of his long-dead first love has resurfaced.

The movie by Andrew Haigh led critics’ polls in Berlin’s Tagesspiegel newspaper and industry magazine Screen among the 19 contenders, with Britain’s Daily Telegraph giving it five out of five stars.

Rampling has “rarely been better than she is here, in the role of a placid, dog-walking, tea-drinking middle-class Brit, who finds the floor abruptly falling out beneath her,” its reviewer Tim Robey wrote from the festival.

Panahi, who is outlawed from travelling abroad and was absent from the Berlin premiere, appears on-screen as a Tehran cab driver, swapping stories with the denizens of his city.

A mounted dashboard camera allowed him to film in secret, away — at first — from the prying eyes of the Islamic state’s authorities.

Film industry bible Variety called it a “terrific road movie” that offered “a provocative discussion of Iranian social mores and the art of cinematic storytelling”.

Latin American movies were out in force, with Chilean director Pablo Larrain making a splash with “The Club” about defrocked paedophile priests given refuge from justice by the Roman Catholic Church.

Trade magazine The Hollywood Reporter called it a “grippingly sinister portrait” and pronounced Larrain, who garnered an Oscar nomination for his 2012 black comedy “No”, to be “one of the more genuine talents working in cinema today”.

The first Guatemalan film ever in competition, “Ixcanul Volcano” by Jayro Bustamante about a poor Mayan teenager living with her family on a coffee plantation who plots to flee to the United States with her boyfriend, also drew warm applause.

While the latest releases by veterans such as Terrence Malick and Werner Herzog divided critics, Britain’s Peter Greenaway fared better with his audacious biopic “Eisenstein in Guanajuato”.

The sexually explicit film imagines an episode in the life of Sergei Eisenstein, the lionised Russian director of “Battleship Potemkin”, who tried to relaunch his career in Mexico in 1931.

During his self-imposed exile, he starts a torrid affair with his local male guide.

Critics said Finland’s Elmer Baeck, who portrayed Eisenstein as an exuberant intellectual and a charming clown, had strong odds to bag the best actor gong.

“Sworn Virgin”, the debut feature by Italy’s Laura Bispuri, about a woman in the Albanian mountains who opts to pass as a man rather than live her life in marital subjugation, featured a much-praised turn by its star, Alba Rohrwacher.

The festival got off to a shaky start on February 5 with the premiere of Isabel Coixet’s “Nobody Wants the Night”, featuring Juliette Binoche as the early 20th century Arctic explorer Josephine Peary.

Peter Bradshaw of the Guardian said the picture “comes near to being broken on the wheel of its own ponderousness”.

The movie, which screened in the festival’s Panorama sidebar section, stars comedy actress Kristen Wiig (“Bridesmaids”) as the couple’s best friend who agrees to carry their baby.

A seven-member jury led by Hollywood director Darren Aronofsky will hand out the Golden and Silver Bear statuettes, which can help propel a film to global box office success.

Among award winners last year were “The Grand Budapest Hotel” and “Boyhood”, both nominated for Oscars later this month, and the gritty Chinese thriller that won the Golden Bear, “Black Coal, Thin Ice”.