Shortly after Orville and Wilbur stopped making bicycles and started hanging out around Kitty Hawk Hollywood took to making movies about those who venture into the wild blue yonder. Here is WATM’s definitive list of the best Air Force characters they’ve created over the years: The Great Escape is one of the best heist-style films of all time. It’s also one of the best military films of all time, based on the true story of a group of Allied POWs put together in a Nazi “escape-proof” camp because of their ability to escape from POW camps. Captain Hilts of the US Army Air Corps constantly frustrates guards with escape attempts, landing him in solitary confinement, or the “cooler.” Hilts is easily #1 on this list, not only because he’s depicted on screen by Steve “The King of Cool” McQueen, but also because the real guy this character is based on David M. Jones, an Air Corps pilot who started World War II as a Doolittle Raider (the character can also be seen in “Thirty Minutes Over Tokyo”), and flew sorties over North Africa before being captured and held by the Germans for nearly three years. Jones survived the war and went on to a 37-year career in the Air Force. 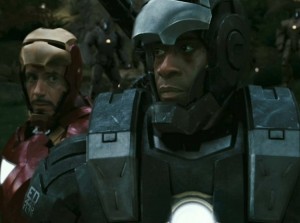 James Rupert “Rhodey” Rhodes is not based on a real character, though having the War Machine around IRL would make life a lot easier for much of the Air Force (and the lawless areas of Pakistan too… probably). Rhodes is the stable, dependable version of Tony Stark in the Marvel Cinematic Universe (In the Marvel Comic, Rhodey is a Marine). Often acting as the superego to Stark’s id (Pepper Potts is the ego that rounds out the trio), Colonel Rhodes is also Stark’s best friend and the DoD liaison to Stark Industries, which means he gets to pal around on private jets and hang with the Avengers while taking down terrorists and robot drones (that aren’t American). 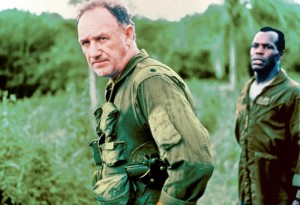 BAT 21 is a the dramatized story of the rescue of Lt Col. Hambleton (whose call sign was BAT 21 Bravo), the largest, longest and most complex search and rescue operation of the Vietnam War. Hambleton was the navigator on a USAF EB-66 aircraft and an expert in signals intelligence whose aircraft was destroyed by a surface-to-air missile. Hambleton was the only survivor, but his parachute took him well behind the North Vietnamese lines. With the amount of classified information in Hambleton’s head, capture by the communists would have been extremely detrimental to U.S. security. Hambleton (played by Gene Hackman, who is awesome in every movie) makes radio contact with Birddog (Danny Glover), a Huey pilot, and makes his way South to be picked up. To communicate his intended path, Hambleton, in true Air Force fashion, uses a code comprised of various golf courses he knows. The actual rescue of Hambleton took 11 days, six American troops’ lives, a lot more ARVN lives, and another plane being shot down. In real life Hambleton was rescued by Navy SEAL Thomas R. Norris (who was awarded the Medal of Honor for the rescue) and a South Vietnamese Navy Petty Officer. 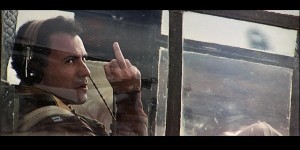 Speaking of thumbing your nose at your command, Alan Arkin headlines the legendary cast of Catch-22 as Yossarian, a US Army Air Forces B-25 Bombardier, stationed in the Mediterranean during WWII. He’s committed to flying the dangerous missions as quickly as possible so he can go home just as fast, but his squadron commander, pretending he’s the Wing King, keeps raising the required number of missions. Yossarian can’t even claim a mental breakdown to go home because famously, Airmen “would be crazy to fly more missions and sane if he didn’t, but if he was sane he’d have to fly them. If he flew them he was crazy and didn’t have to; but if he didn’t, he was sane and had to.”

Another real Airman, A2C Cronauer is an Armed Forces Radio Service DJ stationed in Vietnam whose DJ style is less than appreciated by his superiors but beloved by the men in the field (rock and roll forever!). When Cronauer is suspended for his style and his determination to read the news, the command is flooded with letters demanding his reinstatement. Few things in life are more satisfying than someone thumbing their nose at a stodgy old command. Cronauer’s real-life show was called “Dawn Buster” and its opening was immortalized forever by Robin Williams’ GOOOOOOOOOOOOOD MORNING VIETNAM. 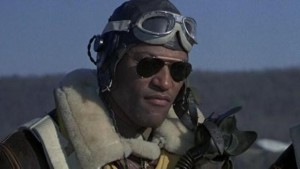 Some points have to be added when the whole world is against you, even your own government. Lee, portrayed onscreen by Lawrence Fishburne, was loosely based on Robert W. Williams, an actual Tuskegee Airman who helped co-author the screenplay. In the film (and IRL), the famous group of African American pilots struggling to join the US war effort as capable fighter pilots finally get their chance when Hannibal Lee (Fishburne) and his wingman get the chance to protect B-17s over Italy and sink a destroyer for good measure. 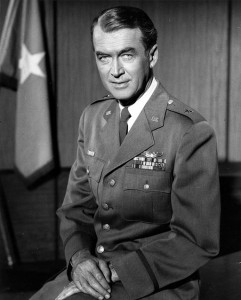 Jimmy Stewart plays Holland, a St. Louis Cardinals baseball player who is on inactive reserve in the Air Force who gets recalled to active duty for 21 months, which would be unbelievable for anyone else but Jimmy Stewart. Stewart, whose family military tradition dated back to the Civil War, enlisted in the Army Air Corps as a private, was an officer pilot within a year, and so enjoyed bombing Germans in his spare time he would eventually retire from the Air Force Reserve after 27 years. Holland’s life is on constant hold as he is on alert status to deter the Soviets from starting WWIII. He forces a landing of a damaged aircraft in Greenland after his crew bailed out then flies new jets to Japan with a broken arm from that landing, an injury which ends both his military career and his baseball career, and he seems mildly okay with it. A commie-obsessed Air Force General, he starts World War III after describing a Communist plot to pollute the bodily fluids of Americans. He launches an all-out attack on the USSR and refuses to give the codes that will belay the launch orders. While the Kubrick’s masterpiece obviously isn’t based on a real war, the crazed General is based on Air Force General Curtis LeMay, who once threatened to bomb the Soviet Union back into the Stone Age.

Who better to lead a team through an alien-created wormhole navigated by hieroglyphs uncovered in Giza than a career Air Force Special Operations officer? No one, obviously, as Colonel Jack O’Neil (Kurt Russell, with a severe flat top) takes a day off of contemplating suicide to lead one last mission to destroy the Stargate and ends up saving humanity by beaming a nuclear weapon onto an alien ship. It’s not (just) science fiction. It’s what we do every day. 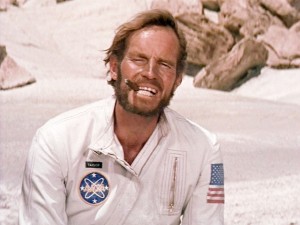 George Taylor’s background doesn’t specifically mention his Air Force affiliation, but does mention he was a West Point grad in 1941 and flew missions in World War II and Korea, and his then becoming an astronaut is clearly indicative of a U.S. Army Air Corps to Air Force transition. So the Air Force gets Charlton Heston (also Marky Mark Wahlberg’s Capt. Leo Davidson from the 2001 remake, clearly identified his tribe as United States Air Force). Taylor earns a spot on this list because of Charlton Heston’s iconic performance.

The author hangs his head in shame as both a film student and Air Force veteran. Few scenes in cinema rival the scene where Yeager is walking away from a smoldering heap, badly burned, holding his parachute because anyone who’s ever met Yeager in real life knows that’s the kind of badass sh*t he did every day of his career. Via: We are the mighty