There Is Nothing New Under The Sun 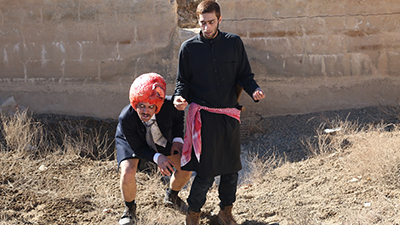 A girl narrates her nightmares, and the boundaries of dream and reality start to fade and become indistinct. She says that she was raped in her dreams and by telling us her story she is going to do the same with our minds. She dreams that she is pregnant and is continuously giving birth to bloody, dead foetuses, which she eats immediately after the delivery. However, after the narration is finished, we see a male, not a female, protagonist going through all these events. When the protagonist is raped, the bulge of pregnancy appears on his head and not in his belly. He dreams of his mother, who had been murdered in Iraq, coming to his place with bags of shopping. Then, an oppressive soldier with a machine gun enters his dreams and he is omnipresent. After a few encounters with the soldier and due his temptations, the protagonist executes his mother in front of the camera.