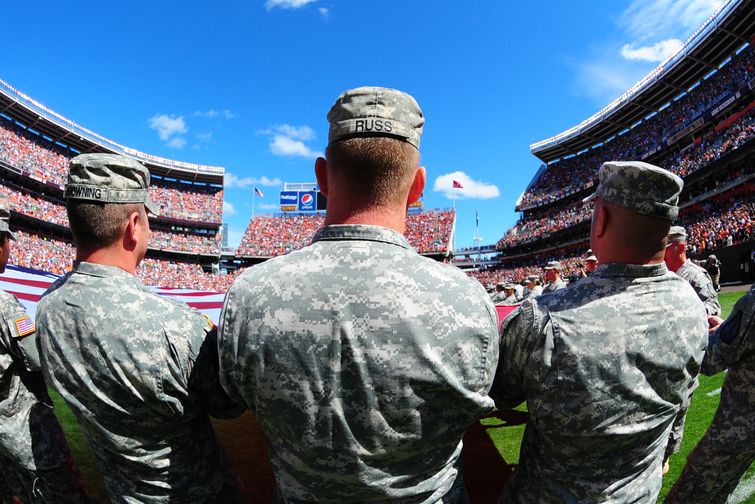 Every home game, the New York Jets honor a “hometown hero”: a member of the New Jersey Army National Guard who is shown on the Jumbotron and applauded by thousands of fans for his service.

It seems like an appreciative act of patriotism on the part of the Jets. But it turns out it’s actually an advertising tool for the National Guard — and the federal government has paid the Jets $377,500 over the past three seasons to do this.

An investigation by Christopher Baxter and Jonathan D. Salant at NJ.com found that over the past three years, the National Guard has paid $5.3 million to 11 different NFL teams for these sorts of salutes, along with pregame video messages and other sorts of promotion. Arizona Senator Jeff Flake recently criticized these sorts of agreements as a particularly misleading instance of wasteful government spending.

Of course, it’s well known that various branches of the military advertise as a recruiting tool. And veterans are frequently thanked for their service at NFL games and other sporting events.

THE NATIONAL GUARD HAS PAID TEAMS $5.3 MILLION OVER THE PAST THREE YEARS

But what makes this sort of thing so disingenuous is that fans assume NFL teams are thanking soldiers out of genuine appreciation for their service. In these cases, they were getting paid for it: it was advertising, disguised as gratitude. It’s a lot like a news outlet running an ad as an article without any sort of disclaimer.

When Baxter and Salant talked to Jets spokesperson Bruce Speight, he explicitly categorized the “hometown hero” as advertising. “As with all of our sponsors, we have worked with the National Guard to create tailored advertising and marketing programs to meet their specific objectives which in this case was recruitment and retention by targeting our fans and audience through media and stadium assets controlled by the team,” he said.

This doesn’t mean all NFL teams’ salutes to veterans are paid for. But the investigation turned up 10 other teams that had similar arrangements, including the Dallas Cowboys, Pittsburgh Steelers, and Baltimore Ravens — who took in a league-high $885,500 from the National Guard over a three-year period.