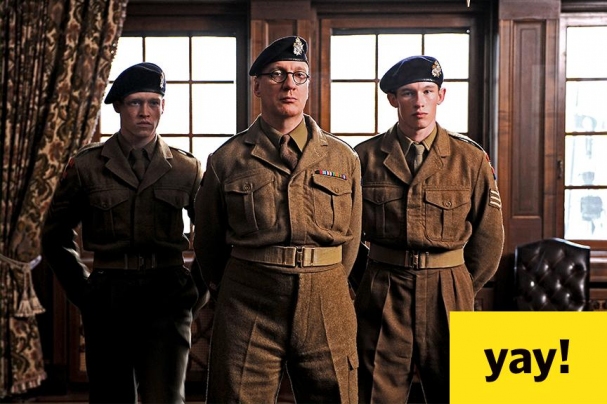 Picking up nine years after Hope and Glory leaves off, John Boorman’s latest (and last) film, Queen and Country, carries its predecessors same traits. It’s a comedy set during war, and it’s highly effective considering most great war movies focus on the horrors or the battles or the psychological torture (Saving Private Ryan, Das Boot, The Bridge on the River Kwai). There aren’t as many war comedies, and somehow the worst war comedy ever, Life is Beautiful (and one of the worst movies ever made), walked off with a slew of Academy Awards.

Hope and Glory, on the other hand, is a fine war comedy. Set during the blitz, its protagonist is nine-year-old Bill Rohan, and one of the greatest days of his life is the day his school is demolished by a German bomb. Boorman, who also wrote Hope and Glory, manages to make the London bombings a playground for Bill without disguising the terror that goes along with randomly being attacked in the night.

Now Bill (Callum Turner) is 19 and being shipped off to fight in Korea, but first there’s basic training. Queen and Country, like its predecessor, is sweeter than most war films, and more sentimental. But like Hope and Glory, there’s a gravity to it that eventually rears its head. Though Great Britain had a smaller stake in Korea (and therefore the events of Queen and Country necessarily don’t have the same stakes), there’s still something about being locked away for two years without say in the matter (Bill is conscripted) that makes life unbearable.

So Bill, who doesn’t believe in the Korean War—or in capitalism or communism—sets out to make life as bearable as possible while stuck teaching typing to other conscripts. At least he doesn’t have to go off and fight; that would be quite a different movie.

Bill makes friends with a like-minded scallywag, the delightfully named Percy Hapgood (Caleb Landry Jones), and as non-commissioned officers, they have a sweet set-up; they can make trouble for their overbearing boss, Sgt. Major Bradley (David Thewlis, who disappears into this showy character role), who likes to write them up for offenses such as not having the top button done up on their uniforms.

Along with Redmond (Pat Shortt), a lazy corporal, they make Bradley’s life hell. Until they discover that Bradley suffers from post-traumatic stress. And Percy gets in serious trouble for a prank involving the regimental sergeant major. And Bill falls in love with a woman who suffers from severe depression.

This film is laugh-out-loud funny, but its sadness sneaks up on you. Even the minor wars—if there is such a thing—are ultimately hell. Queen and Country is a fitting end to Boorman’s storied career.

QUEEN AND COUNTRY
Directed by John Boorman
With Turner, Jones and Shortt
The Screen
R
115 min.