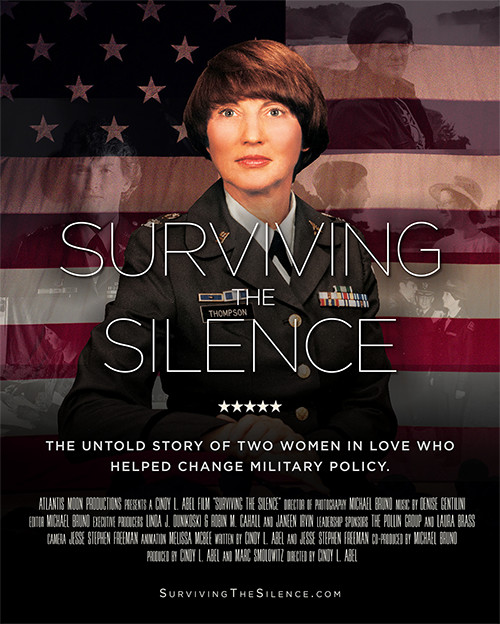 Surviving the Silence tells the story of two women in love who played a part in changing military policy, shining light on the unknown history of how a closeted colonel forced to expel an Army hero for being lesbian did so in a way resulting in re-instatement via federal court.

Years before Don’t Ask, Don’t Tell, Colonel Patsy Thompson presided over the review board that dismissed Colonel Margarethe Cammermeyer for being a lesbian. Although she had been in tough spots over the course of her 28-year service, this was the toughest. Presiding over this case forced Patsy to confront her own moral dilemma and her own secret: she too was a lesbian.

Margarethe Cammermeyer, a highly-decorated nurse and war hero, was on track to becoming a general. During a security clearance interview, she truthfully answered when asked if she was a lesbian. This started an investigation which led to her eventual and highly-publicized expulsion from the Army National Guard. In 1995, Margarethe’s memoir was adapted as a television movie, which was executive-produced by Barbra Streisand and starred Glenn Close. But Patsy’s story has remained a secret…until now.

In addition to revealing history, Surviving the Silence explores the years before Patsy would be forced to preside over Margarethe’s military trial: the traditions that influence her, the experiences that shape her, and the moral code that determines the inevitability of her decision. She and her now-wife Barbara Brass candidly share how they wrestled with heart-wrenching choices in public and in private, hiding their relationship, speaking in code on the phone and struggling to protect their love while preserving Patsy’s career.

Mary Newcombe, Cammermeyer’s attorney, describes knowing the foregone outcome of the military trial and developing a plan for the civil trials. As she shares preparing for the unavoidable military expulsion, she also speaks to the critical importance of the way Thompson managed the process at each stage and credits her with setting up the civil trial victory. Eric Fanning, the first openly gay Secretary of the US Army, offers a unique perspective of the role they played, having worked in the Defense Department as a closeted then openly gay man, including working to allow open transgender military service when he was Deputy Secretary of Defense.

An emotive human, cultural and political story of integrity, fear, resilience, courage and love emerges through elegantly interwoven narratives, saturated with evocative visual social and historical contexts. Surviving the Silence is a coming out story like no other, deeply moving, troubling, revealing of unknown, policy-changing history – and powerfully inspirational.