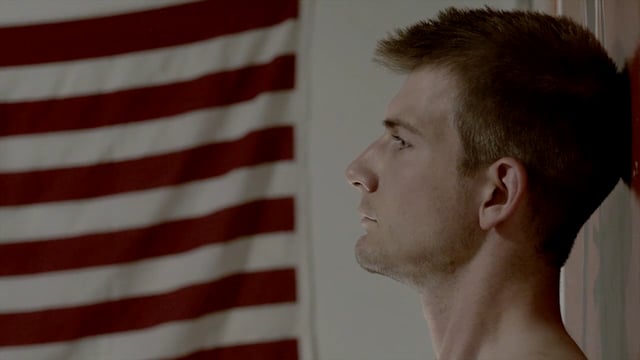 Purple Heart tells the story of a young Iraq War veteran caught in the downward spiral of PTSD. His girlfriend, a deaf artist, tries to help him but he pushes her away. As his life unravels, he begins to lose control, veering towards tragedy. Will the war

We open on a POV of a raid through an abandoned building in Iraq. They open the door and an explosion fills the frame… ERIC, mid-twenties, lies in bed staring at the ceiling. He is serious beyond his years. KATE lies beside him, asleep. A gun is laid on the kitchen table. Eric field strips and cleans it. Kate comes in. Deaf, she signs for him to leave it in pieces and come to bed. He speaks and signs that he wants to finish. Angry, she leaves. Eric comes back to bed. Kate pushes him away, but Eric playfully persists. They share a tender moment. Eric is late for work. His supervisor, NICK, gives him a hard time, condescendingly calling him “Captain America.” At home he drinks, staring off into the distance. Glass glows red hot. Kate works in a glass blowing studio. She let’s Eric take over, teaching him, but he storms out, frustrated, when the glass breaks. Pictures of a younger, carefree Eric line a table. Kate and Eric are at MEG’s house (his mother). Kate thinks he looked cute. Meg tears up remembering how he was before going to war. Outside, Eric wrestles with DYLAN (his barely teenage brother). Eric pins his much smaller sibling before letting him escape. Kate and Meg come out with food. Dylan reappears with a Nerf machine gun. He laughingly targets Eric. The darts pour out in slow motion. Eric tries to smile but looks strangely discomfited. Eric drives alone. He sees two men talking by the side of the road, watching him pass. Suddenly he imagines himself driving in a up-armored Humvee with a soldier from the opening raid. He sees some trash ahead by the side of the road. Eric evades the garbage as if it were an IED, barely avoiding an accident with an oncoming car. Eric squeezes the trigger on his gun in the woods, emptying his clip. Suddenly we’re back in the POV of the abandoned building in Iraq. The squad opens the door. The explosion hurls the POV to ground — face-to-face with a dead soldier. Eric stands pressed against the wall of his darkened bedroom, staring at Kate asleep. Eric compulsively field strips and reassembles his gun, again. Morning. Kate wakes, alone. She finds Eric squatting in a living room corner, asleep. She shakes him. He startles awake, pointing his gun at her. Kate freaks. Eric tries to apologize. She says he has to get rid of the gun. She tries to storm away. He grabs her. She pushes him away. He slaps her. Kate storms out of the house with her bag. Eric smashes a piece of glass artwork. Eric arrives late for work. Nick starts in on him. Eric lunges, throwing him to the ground. MARTY, a co-worker, pulls him off. Nick yells. Eric is fired. Once again Eric field strips his gun. Again and again. Faster and faster. Images of Iraq flash by. The echo of gunfire haunts him. Eric sits in his car. He opens the glove compartment and pulls out his gun. Studying the looming black barrel. He stares out. His gaze etched with grim determination. Eric exits his car, Shoving the gun in his belt, he covers it with his shirt. Kate fires glass. Eric enters, intent. Everything slows. She looks up, apprehensive. He pulls the gun from his belt . . . Will the war claim another casualty?