The NRL will commemorate the Anzac centenary with one of the largest football marathons ever, with five games played across Australia and New Zealand on Anzac Day next year.

The traditional Anzac Day clash between St George Illawarra and the Roosters will headline the 10-hour rugby league marathon on Saturday, April 25. While Melbourne and the Warriors have squared off on Anzac Day in Melbourne since 2011, they will host separate matches next year.

The round-eight clashes will see the Warriors host Gold Coast at midday, followed by the Knights taking on North Queensland in Newcastle at 2pm. 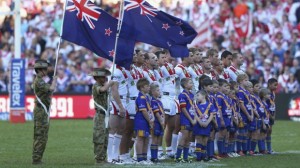 The Roosters and St George Illawarra will play at 4pm, while arch-rivals the Storm and Manly will do battle in Melbourne at 6pm. Brisbane and Parramatta will wrap up the football feast at Suncorp Stadium from 8pm.

There will be no Monday night fixture that round, with Canterbury playing the Tigers on Friday night and two Sunday games. Penrith and Cronulla will play, while defending premiers South Sydney will tackle Canberra to complete the round of games.

NRL head of commercial Paul Kind said the round would mark an important event on next season’s calendar.

“This is a special day, a day when everyone will be reflecting on the 100th anniversary of the Gallipoli landings,” Kind said. “We have always had a close relationship with the RSL and we want to play our part in the commemorations.

“Naturally, the focus of the day will be on the Anzac commemorations. It will also be an incredible day of football as the game shifts to five different cities in succession, allowing rugby league to recognise and commemorate the Anzac spirit.”

The clash between the Roosters and St George Illawarra has become a season highlight since it became a regular fixture in 2002. The match regularly draws a crowd of more than 30,000.

After a lengthy delay, the NRL will on Monday release its full draw for the 2015 season, which will include live 4pm Sunday games for the first time. Nine Network boss David Gyngell admitted fans had sent a clear message that they wanted live action as opposed to the unpopular delayed telecast of the 3pm Sunday kick-offs.

“Everyone prefers to watch games live – we just had to make it happen,” Gyngell said.

The deal reached with Nine and Fox Sports, is a coup for rugby league fans who have long complained about delayed games punctuated with commercials on Sunday afternoons. Under the deal, fans will be able to watch seven live games a week, with two on Nine and five on Fox Sports.

“There is nothing better than watching games live and now it is going to become a prime-time reality on Sundays,” said NRL boss Dave Smith. “Channel Nine will show Sunday games live throughout the season so fans will see every minute of the game as it happens.”

It means NRL games will be shown live on Thursday, Friday, Saturday, Sunday and Monday in 2015. “All 26 Sunday matches will be live in Sydney, with 23 games to be shown in Brisbane once daylight savings is finished.

Smith has revealed the first three weeks of Sunday football on Nine. Round one will see Penrith play Canterbury, while the week after it will be premiers South Sydney against the Sydney Roosters, before the Rabbitohs take on Wests Tigers in week three.