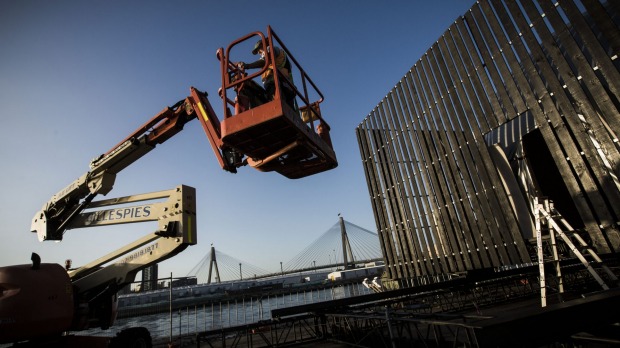 Two domes on extending arms slowly stretch to from opposing sides and finally join together as one.

Once the two sides of the chapel-like dome are joined the 20 people on each side will hear the ghostly voices of soldiers echoing from a battlefield scene. They can mingle and then cross over to the other side.

This is a new art installation called Nomanslanding to commemorate the centenary of ANZAC and World War I and was cautiously manouevred from White Bay around to Cockle Bay on Saturday ready for public opening next Thursday 2nd April. 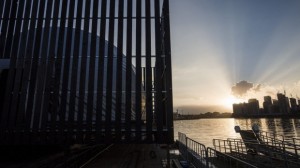 The artwork, created by five international artists and, initiated by Sydney Harbour Foreshore Authority, gets its premier in Sydney before travelling to Germany and Scotland. It is evocative of no man’s land in World War I and memories such as the brief ceasefire at Gallipoli so that both sides could bury their dead and Christmas Day on the Western Front when a brief truce allowed Germans and British to battle it out with a game of football in the snow.

Dr Michael Cohen, creative producer for Sydney Harbour Foreshore Authority, said visitors enter through an army tent and sign up for the experience, a bit like enlisting in the war.

“As the two halves of the dome approach each other you confront the enemy, a mirror image of yourself, and you confront your own mortality,” he said.