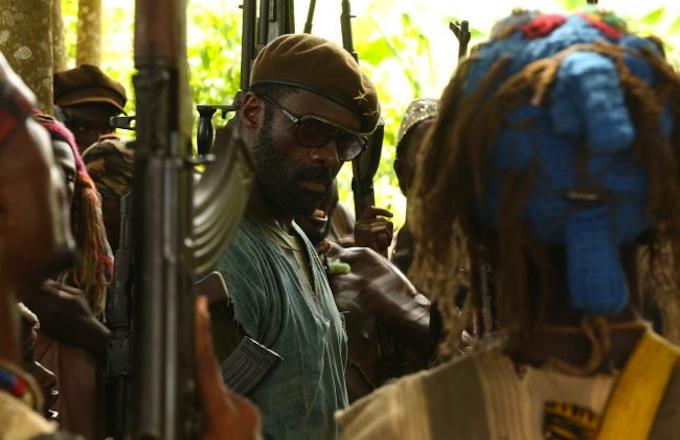 Netflix has already established itself with original television programs, but now it’s going all in on movies. And gunning for Oscars. The streaming service has outbid Fox Searchlight and Focus Features (two of the biggest independent film distributors) to the tune of $12 million for Cary Fukunaga’s African child soldier drama/horror Beasts of No Nation. This is the project that Fukunaga filmed as his follow-up to the immensely successful entire first season of True Detective. Idris Elba stars in the film as a brutal West African mercenary who leads a group of child soldiers into an unnamed, bloody civil war.

Netflix will release the film, first, in theaters, prior to their streaming service. And this is the first major indication that Netflix (which has already won Emmys and Golden Globes for original TV content) is throwing its hat into the Oscar arena. Fox Searchlight, the indie-spirited wing of major studio Fox, has ushered in the last two Best Picture winners: 12 Years a Slave and Birdman, and between Birdman and The Grand Budapest Hotel, Searchlight won the most Oscars of any distributor this year. But they were outbid here.

Birdman just became the second lowest grossing Best Picture winner of all time. And all of the Best Picture nominees added up (minus American Sniper) do not equal the total gross of American Sniper. The prestige picture is not an arena to get into for major box office. If Netflix is able to get some awards success (y’know, if Beasts of No Nation is deemed to be as good as early distro screenings have indicated) despite going up against the studios and established indie distributors, this could be a game-changer for how mid-budgeted prestigious films are distributed. More people have access to Netflix than they do to “select theaters” where many of these types of films receive soft qualifying rollouts.

Netflix out-paying Fox and Focus for a prestige title—from a prolific burgeoning American auteur—is more akin to declaring war on the stuffy theater distribution system than Netflix’s previous deals to digitally release the next Adam Sandler, Mark Duplass, and Pee-wee Herman films. Netflix has ushered in two Oscar-nominated documentaries (Virunga and The Square), but has yet to release a scripted film.

With apologies to the artistry of Adam Sandler, Fukunaga is an interesting director to start Netflix’s prestige movie entry. He dabbled in two totally different genres—immigration in Sin Nombre and Victorian melodrama in Jane Eyre—before creating a cinematic TV-series, single director trend with True Detective. His first foray into television featured one of the most cinematic series ever. Fukunaga is future forward. And so is Netflix. But film has already proven itself to be the slowest to adapt of all the entertainment models. Color us red with intrigue—for a film that was already on our radar.