More than 400 people came midday Saturday to the National World War II Memorial for the 71st anniversary of D-Day, the massive landing and battle on the coast of France. WASHINGTON, DC – JUNE 6:
Army vets stand as their branch of the services is announced during a WWII Memorial Ceremony honoring the veterans of D-Day on the 71st anniversary of that event, on June, 06, 2015 in Washington, DC. From left are Dennis Logue, Abe Kamikow, and Kenneth Bruner, all from Illinois.
(Photo by Bill O’Leary/The Washington Post)

Among the veterans present were members of three honor flights — special flights that bring veterans to the D.C. memorials — as well as middle school students from Elk River, Minn. 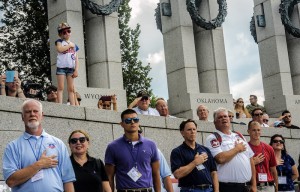 WASHINGTON, DC – JUNE 6:
Spectators stand at attention for the color guard as a WWII Memorial Ceremony begins honoring the veterans of D-Day on the 71st anniversary of the massive landing and battle on the coast of France, on June, 06, 2015 in Washington, DC.
(Photo by Bill O’Leary/The Washington Post)

Some 10,000 Allies were killed or wounded at D-Day, said Holly Rotondi, executive director of the Friends of the National World War II Memorial. Her group does five major events each year at the memorial.