Miracle Mile and the fear in late Cold War movies 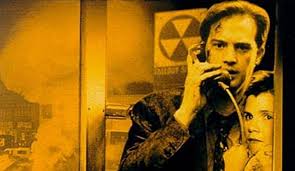 The cult film Miracle Mile captures the fear of nuclear destruction better than any movie of the 80s, Ryan writes…

If you were a British school kid in the 80s or 90s, it’s possible you saw Threads, a docu-drama about the effects a nuclear war might have on our windswept isle. Readers, it was terrifying. What made it so effective was director Mick Jackson’s devotion to realism; the nuclear fallout and radiation sickness wasn’t happening to pretty Hollywood celebrities, but to ordinary-looking people you might meet at your local greengrocer’s.

To modern eyes, Threads might not look like much; just another grainy, low-budget bit of ephemera from a pre-internet age. But Threads tapped into a nagging fear that had remained in the world’s psyche for decades; until the Cold War ended in 1991, the possibility of a nuclear war between the US, NATO and the Eastern Bloc was a very real one. Threads brought that fear out into the open, and made the horror implicit in all those vague “Protect & Survive” public information TV ads plain for all to see.

Threads was made at a time when those fears were once again at their height. After a period of relative calm in the 1970s, the spectre of war returned with a vengeance in the first part of the following decade as east-west relations began to break down. This renewed angst frequently played out in the movies – and the cult thriller Miracle Mile rivals Threads in its depiction of the era’s fear and loathing. 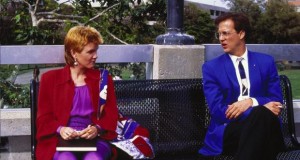 Written and directed by Steve De Jarnatt (who also made another little-seen cult item, 1987’s Cherry 2000), Miracle Mile is a fascinating blend of romance, thriller and pitch-black comedy – so black, in fact, that you’re never quite sure whether you’re supposed to laugh or gasp at some of the unpleasant things that happen. It begins as the most conventional rom-com you’ve ever seen; wholesome Jazz musician Harry (Anthony Edwards) bumps into kooky waitress – and, we later learn, would-be writer – Julie (Mare Winningham) in a Los Angeles museum.

It’s love at first sight, and the pair immediately arrange a date at midnight – the time when Julie’s shift at a local diner finishes. Harry heads back to his hotel to catch some sleep before his big night out, but due to a bizarre series of events, Harry’s alarm clock doesn’t go off. Waking up at 4am instead, Harry rushes off to meet Julie at the diner, only to find – surprise, surprise – that she’s long since gone home.

Pacing up and down in the benighted street, Harry suddenly hears a phone ringing in a nearby booth. Answering it, he hears a panicked voice on the other end, babbling almost unintelligibly about nuclear war and a 70-minute window before they hit America’s west coast. The caller, it turns out, has dialled the wrong number, and had originally intended to call his father. As Harry struggles to make sense of the caller’s ramblings, a gunshot rings out down the phone line, and a new, more authoritative voice cuts in.

“Forget everything you just heard,” the voice tells Harry. “And go back to sleep. 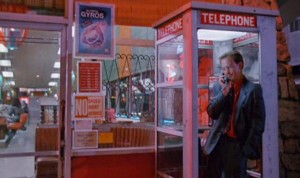 Thus begins a bewildering, funny and frightening movie that barely lets up until the end credits. Most movies don’t bother to introduce their ticking clock until third act. De Jarnatt introduces his within the first thirty minutes.

Miracle Mile revives the paranoia of 50s “reds under the bed” sci-fi flicks, and the retro theme extends to the production design. Harry and several other characters drive around in big, bouncy 50s cars straight out of American Graffiti. The diner where Julie works is a 50s-style establishment called Fat Boy – a name derived from the two atomic bombs dropped on Hiroshima and Nagasaki at the end of the Second World War.

When Harry tells the rag-tag bunch of street cleaners and other customers still haunting the diner about his strange phone call, his terror-filled ravings recall Kevin McCarthy’s performance in the classic Invasion Of The Body Snatchers. The customers, naturally, think that Harry’s had too much to drink, as he repeats the caller’s warnings of an imminent nuclear attack. It’s only when a yuppie in an expensive suit (played by Denise Crosby, of Star Trek: The Next Generation fame) makes a few calls to some friends with military connections that everyone begins to suspect that, yes, nuclear war may indeed be imminent. 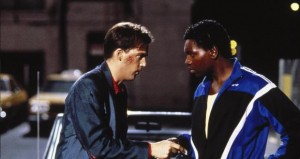 Nevertheless, the possibility that Harry’s fallen victim to a prank lingers for much of the movie. As the customers at the diner band together to find a quick way out of Los Angeles, Harry resolves to find out where Julie lives and whisk her to safety before the missiles fall – assuming, of course, that they were ever even deployed in the first place.

De Jarnatt writing and direction has a slippery quality, where moments of levity can tip over into horror in a heartbeat. The entire plot is structured around a string of coincidences which contrast good and bad luck; Harry has the good fortune to meet his soul mate completely by accident, yet the misfortune to miss their date due to his own thoughtlessness. In a spectacularly strange scene, Harry enjoys a few puffs on a cigarette before bedtime, before flicking the still-lit butt off his hotel balcony.

The cigarette lands in a tree, where – hilariously – it’s picked up by a bird and carried back to its nest. The nest catches fire, affecting a power line, which causes Harry’s bedside clock to cut out. And thus, Harry misses his date. It’s the kind of cosmic cruelty that Kurt Vonnegut might have come up with in one of his novels, and the entire film has a similarly wry, ironic tone. In a parallel scene a bit later on, Harry hits a different tree in his car (such is his haste to salvage his ruined date) and a nest of baby rats drops onto the bonnet. 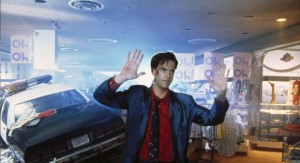 With weird moments like that laced throughout – and believe me, there are many more – it’s little surprise that De Jarnatt took the best part of a decade to get Miracle Mile onto the screen. As De Jarnatt later told a Toronto newspaper, “I could have made this nine years ago if I’d been willing to change the ending.”

That ending, it seemed, was simply too much for Hollywood studios – not least Warner Bros, who initially bought the script, then sold it back to De Jarnatt, then offered to buy it back again for $400,000 on the proviso that they let someone else direct the movie instead. De Jarnatt refused. Regularly appearing in lists of great unmade screenplays, and briefly considered as a Twilight Zone movie at one point, Miracle Mile was finally dusted off thanks to Hemdale, an independent studio that, in the early 80s, seemed to specialise in making films nobody else particularly wanted to make.

De Jarnatt duly went ahead and made his nightmare romance with a budget of just $3.7m – a tiny sum, even by the standards of the 80s. Somehow, De Jarnatt manages to make that small budget count in just about every scene. He introduces great little visual ideas, like the revolving clock outside the diner, which reminds us of the minutes ticking down until the missiles are due to arrive. 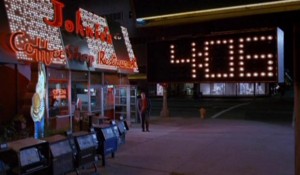 Miracle Mile has often been compared to the Martin Scorsese movie After Hours, another black comedy set in a city at night. I’d argue it’s equally akin to Michael Mann’s Thief or James Cameron’s The Terminator, in that they both evoke the neon dreaminess of Los Angeles in the early hours. De Jarnatt even hired Tangerine Dream, whose woozy electronic music also graced Mann’s Thief and The Keep.

De Jarnatt seems to harbour the same Mann-Cameron affection for the street cleaners, the thieves and the weirdos that Harry finds in his mad dash around downtown LA. He throws in little genre nods and jokes that pass by so quickly you may not even notice them on first viewing; the brief appearances from Cameron favourites Earl Boen as a drunk or Jenette Goldstein as a machine gun-toting yuppie. You’ll also find Robert DoQui, who’d just appeared in RoboCop as a shouty Sgt Reed, muscleman Brian Thompson (the villain in Cobra, among other things), John Agar and Eddie Bunker. At one point, a bunch of characters are making a list of people they’d like to save before missiles descend. In another scene, Denise Crosby’s character makes a phone call to Carl Sagan.

In its rush of humour, coincidences and abrupt bursts of violence, Miracle Mile lurches from one situation to the next. Not all of them satisfy, like one late sequence where a case of mistaken identity which leads Harry on another wild goose chase. Yet in among the black comedy, a palpable sense of dread begins to build. It’s the same dread that lurks in other films of the 80s that also dealt with the Cold War, whether it’s Raymond Briggs’ animated film When The Wind Blows, The Terminator, with its threat of AI-sparked nuclear war, or the docu-drama Threads. It captures the confusion and despair of a group of people who suddenly realise that the threat which had once lurked in the back of their minds is here, in the present. 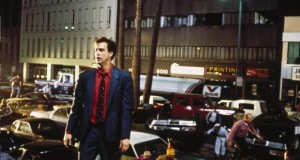 Miracle Mile depicts a universe in flux, where the flick of a cigarette end or the stupid decision of a general at a Dakota air base can affect the lives of otherwise disconnected people. Compared to those who are capable of launching a nuclear arsenal, we’re as powerless as the bird in the nest who’s destroyed by Harry’s falling Lucky Strike, or the baby rats dislodged from their tree by Harry’s careless driving.

Even if we don’t consciously draw the connection between all these moments, the brief love affair between the romantic yet oddly selfish Harry and the sweet-natured Julie makes the horror of Miracle Mile clear. Had De Jarnatt have caved in and changed his downbeat ending, the entire bitter meaning of his film would have vanished. It brings the story full-circle, and rams home the delicacy of human existence in the face of the bomb.

A newspaper article published in 1989 tells us that, when Miracle Mile first screened at a Toronto theatre, the ending was met with dumbstruck silence. The audience sat there for a moment, dazed, before breaking into spontaneous applause. Even viewed today, at a time when the threat of nuclear destruction has abated, Miracle Mile still has the power to disturb. In its 90 quirky minutes, De Jarnatt’s film perfectly distils the fears of an entire generation.