Lessons Learned On The Shores Of Gallipoli 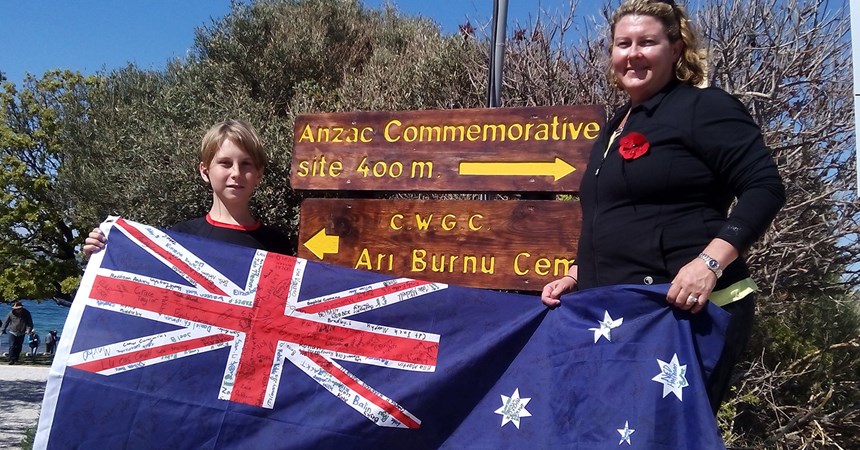 I was privileged to be on the Gallipoli peninsula on 25 April for Anzac day. As an Australian and a history teacher this was not only an honour but also an amazing opportunity to empathise with our diggers and experience history first-hand.

I am not a direct descendant of an Anzac, however, my son, who joined me on the journey, is. Ike is a Year 7 student at St Mary’s High School, Gateshead. His great, great uncle on his father’s side, Dennis Hennessy, landed at Gallipoli with the seventh light horse regiment early in the campaign. He was injured in battle and sent to Lemnos Island to recuperate before being sent to the Western Front and eventually returning safely to Australia in 1919. It was a very proud moment when Ike, wearing war medals and holding an aging image of his uncle, walked the same beach that Dennis had 100 years ago.

On Friday 24 April, we walked three kilometres along Anzac Cove Road towards the commemorative site. It was difficult to reconcile its beauty with the slaughter that had occurred there a century ago. We walked with the Aegean Sea to our left, and the cliffs to our right, with their rugged terrain which our diggers had attempted to scale under the constant barrage of machine gun fire and sniper bullets.

The feeling overnight was one of quiet reflection as well as respectful celebration. We made new friends and shared blankets, food, water and conversation. We attempted to keep each other’s spirits high as we struggled with the uncomfortable seats, the lack of sleep, little food and the cold conditions. It was a long 12 hours, however, not nearly as arduous or uncomfortable as what our diggers experienced.

The most memorable moment of the dawn service was at the commencement. The crowd of 10,000 suddenly stilled and went quiet. All we could hear was the lapping of the Aegean Sea against the shoreline, the shallows lit up with three spotlights. Out of the silence came the unmistakable sound of a didgeridoo. The moving traditional Maori call to gathering then preceded the formalities of the occasion.

We also attended an Australian memorial at Lone Pine cemetery. This sacred space is dominated by the solitary pine tree standing in solemn vigil over the graves.

What have I learned from this amazing experience? How will this newfound knowledge inform my teaching and inspire my students?

Perhaps the most important lesson came from my son. Despite the fact that we were in their country to commemorate a battle that we fought against their ancestors, we were welcomed and treated as friends by almost every Turk we encountered. On one occasion, after once again sharing stories and a laugh with a local, Ike said to me, “Mum, the Turkish people are really nice, why did we want to kill them?”. The innocence of youth!

Prior to this experience I never really considered the experiences of the Turkish people when I taught about the Gallipoli Campaign. Whilst it is imperative to continue to commemorate the sacrifice our diggers made for us, we should also spare a thought and say a prayer for the Turkish soldiers who also lost their lives. In future, the students in my classroom will be encouraged to look at the campaign from the Turkish perspective as well as our own.

The second thing I have learned that will become common practice in my classroom, is to recognise and reward ‘Anzac like’ behaviour. I will challenge my students to adopt the Anzac spirit in their daily lives. Be brave and courageous in the face of adversity; be resilient when things don’t go your way. Be proud of your country, of your school community and of yourselves. Most importantly though, look after your mates.

The memories from our pilgrimage will stay with us forever. Our experience has nourished us and tightened our bond. I would encourage anyone who has yet to visit this sacred place to do so to ensure that those who paid the ultimate sacrifice are never forgotten. Lest we forget.