Kurds honor US military veterans for help two decades ago 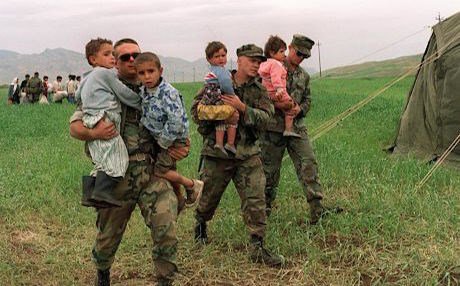 WASHINGTON DC– Kurdistan Regional Government (KRG) Representation in Washington will hold a reception in honor of US military veterans for their support to the people of Kurdistan and Iraq on Thursday.

“We are hosting this reception to thank American veterans of military and humanitarian operations in Iraq and Kurdistan,” Bayan Sami Abdul Rahman KRG’s Representative to Washington told Rudaw.

Abdul Rahman said that the KRG honors US veteran who rushed to help millions of Kurds who fled the advancing Iraqi army in 1991 and were “were stuck on the mountains without even the barest necessities and were dying from exposure,”

“Saddam’s forces were threatening the Kurds after the Uprising. Those operations launched by the US saved thousands of lives,” said the KRG representative in Washington.

Abdul Rahman said the Kurds remain loyal to their friends, in particular the United States.

“We Kurds don’t forget our friends,” she said. “The United States has played a critical role at key turning points in Kurdistan’s recent history: in 1991 with Operation Provide Comfort, in 2003 with the liberation of Iraq and in 2014 with the defence of Erbil and Mount Sinjar. Today we are together fighting ISIS and upholding freedom.”

KRG Minister of Foreign Relations Falah Mustafa and a number of American generals and military figures are expected to attend the reception to be held at the KRG representation in the US capital.