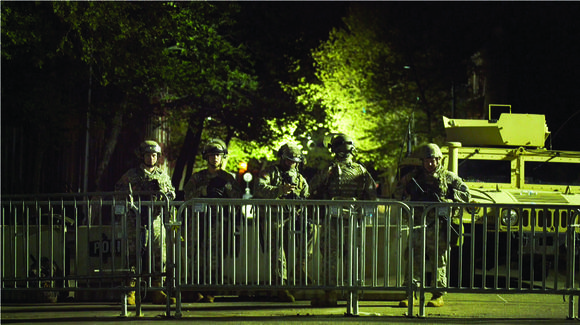 There has been no shortage of takes, riffs, heartfelt appeals, and downright bullshit concerning the Baltimore Uprising over the past few weeks. The content economy certainly has its dictates, but just as important as covering the thing is considering how that coverage affects the people who make up the story.

With his short film “Peace In The Absence Of War,” Baltimore photographer and filmmaker Theo Anthony has, in a few short minutes, offered a perspective on the unrest of April 27 without depicting the images of frustrated black folk destroying property which society deems more worthy than their lives. Whereas his 2014 short film “Chop My Money,” a selection in both the Toronto and Maryland film festivals (in addition to five other festivals, including CIMMFest, where it won an award), allowed him time to shoot more traditionally, the progression of events that last week of April forced him to more actively capture a landmark event.

Anthony’s film starts off with scenes of the Baltimore Symphony Orchestra’s free concert, just two days after the riot. It was certainly a gesture aimed at healing an ailing populace and incubating peace, but it did beg the question of whose peace of mind was more important, Mount Vernon’s or Sandtown’s?

From there, “Peace In The Absence Of War” strings together a handful of shots of various stops on Freddie Gray’s extended “rough ride” and shots observing police, the National Guard, and members of the media standing in moments of pause.

There has long been a sense that Baltimore would be a flashpoint of some sort of culture war, with one segment of our city drowning while another plans developments amid fun and frolic. It seemed to be only a matter of time before our police and neglected citizens of the city they’ve been charged with containing made us “The Wire”-famous again. While most local and national media, in covering events of the uprising, played the familiar tunes of a white supremacist society that incentivizes black degradation and caricaturization (riot-shaming, “cowards” this and “thugs” that), many in Baltimore have lived above the noise to unite against systemic injustice. It has taken Freddie Gray’s death, the protests, the so-called riot, and the white backlash to it to remind me of how vital an embrace of my blackness and that of others truly is. Today, more so than at any point in my life prior, I can touch base spiritually with rioters heard in voice-overs in Anthony’s film. They are not saying “gimme” so much as they are saying, “no more.”

And post-curfew and National Guard, with Geraldo’s mustache nowhere in sight, when suburbanites have asked me “Is Baltimore still smoldering lol,” and if it’s “back to normal” yet, my response has been “fuck normal.” We don’t want things to be normal here, we want them to be just. I’ve realized that the pain of seeing black folk in my city and elsewhere, painted with broad strokes of ignorance and hate, can only be healed with a concerted campaign of love and action. I am still trying to sort out how best I can be of service in this area.

I spoke with Anthony the day it was announced that a grand jury would indict all six officers charged with Gray’s death. We spoke about the emotional investment of documenting such a major event in one’s city, the paradoxical challenge of commentating while also not damaging an already-marginalized people, and the importance of actions over intentions. (Kasai Rex)

City Paper: The more I watch your video, the more I “see.” Or, the more I remember, rather. Some of that stuff seems like it happened a lifetime ago, somewhere else.
Theo Anthony: Yeah, totally. Crazy how fast that happens.

CP: You’d been out amongst the protests for most the week before but specifically on that Monday, did you get swept up in the chaos between the cops and people in the street?

TA: Yeah, I mean, I showed up and basically it seemed that both cops and demonstrators were staked out for a showdown. People were waiting around, looking almost bored, like this surreal calm before the storm. As the night went on things obviously got chaotic, and that waiting took on a different note. But yeah, I was there for most of that too.

CP: “Staked out” seems an appropriate description. I feel like we’ve seen, as a city, what an occupational police force tasked with containing certain populations of people looks like. And what it looks like when the facade of calm breaks down under the weight of brutality. What was the timeline for you between that night and going out to shoot “Peace In The Absence Of War”? Did you feel compelled to make this film after what you’d experienced that Monday?

TA: For the cop presence especially, those moments of boredom were the most interesting to me. Here you have all these people divided into their structural roles, but in the meantime they’re still human, you know? Those moments of boredom were where that was most evident. I went out on Monday night and declined to publish most of the material that I had shot. Most of it was violent, and it felt irresponsible to put those images out there where they could be used however anyone wanted them to be used, which at the time was not so good for Baltimore. Like only contributing to the spectacle. The next day I heard about this free concert that the BSO was putting on, and I thought it would be really cool to check out, like this oasis of beauty amidst all that was going on. And I guess I got there and felt really mixed feelings about what I saw. Like, here were all these really good intentions of peace and healing being put out there, but whose peace, whose healing, you know? I mean, I don’t want to fault the BSO because I think that what they did was a really beautiful and well-intentioned thing, but at the same time you have people listening to 18th-century French baroque music with four or five helicopters circling overhead less than a mile away? Like who are we really reaching out to here? Like what was happening in France in the 18th century? It just shows this fundamental disconnect in communication. Lots of people saying things but not always in the right direction.

CP: In the film, you transitioned from those scenes of the orchestra to long shots of cops standing around, waiting to be told what to do, as well as members of Big Media just kinda hanging out waiting to see what was going to happen next. It was an interesting dynamic of “who watches the watchers,” in a way. I think this was a lot of people’s first experience with the spectacle-hungry corporate media.

TA: Yeah, people see the event but not who makes the event. And I guess it goes back to that boredom thing and how that was a weakness or an aberration in the system, in how it exposed all these humans behind their structural roles. It’s easy to typecast a monster, much harder to understand how other humans bring us to this point.

CP: The shots you use of various points on Freddie Gray’s extended “rough ride” were a solid reminder of how all this has started. Or at least this phase of the struggle. There needed to be that reminder that the police are anything but protectors in many communities in cities like Baltimore and beyond.

TA: What’s eerie about all that peace and quiet after curfew is, that’s your state-sponsored violence at work.

CP: Oh yes, the night shots of silent blocks captured the fact that the curfew was this heavy-handed extension of the powers of an apartheid police force. How did putting this film together compare for you, emotionally I suppose, to your other work? This was such a frenetic situation, despite what could be argued as a protracted buildup.

TA: It was stressful, because usually there’s time to let a story develop. I felt pressure, like this definitely had to come out while the headlines were fresh. But that only compounds the doubt, not with this specifically, but with whatever you’re doing, like, what am I even doing? What am I even saying? Who’s going to ingest this and what are they going to do with this? Like you’re dealing with real people and real events and what you’re doing is irrelevant compared to that. But maybe that makes it even more important to do it in a responsible way?

CP: I think that was the paradox of commentary on any of it. The news cycle wants what it wants, and people are always going to have their agendas, for better or worse. It does have to come down to, this is bigger than me. And what am I really adding by lending my voice? Who am I really helping? It’s definitely been a learning experience for a lot of us I think. Do you plan on doing anything more in this vein, as the situation in town unfolds?

TA: All of my projects right now are being filmed or have something to do with Baltimore, so my work will definitely follow those trajectories. These conversations are really old, you know, and I guess I’ve just been amazed at how close they all follow the same script. Baltimore especially, it’s just so visible.