“Brass Razoo”, written and created by Rupert Raineri and directed by Troy Honeysett, also won Best Script. It is a character study based on a fictional returned serviceman and his adjustment to reality after his time in Afghanistan. Raineri was on hand to accept a glass “Red Poppy” trophy sculpted by Annette Blair from the Canberra Glassworks. This is the film, festival director Tom Papas said, that elicited tears from the sponsor of Best Australian Film, Francis J. Edwards, who appeared on-screen to announce the award. 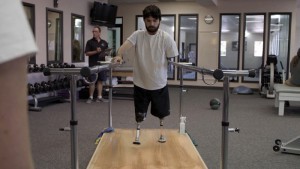 ‘Birthday” by US director Chris King, also carried off awards for Best Director, Best Editing, Best Male and Female Actor. In the 12-minute film, a young military wife gets news that her Marine husband has been severely injured in combat, then. together with him, faces the challenges of physical and emotional rehabilitation. This was one of several films that confronted the psychological probleme encountered by veterans, although it ends on an optimistic note. 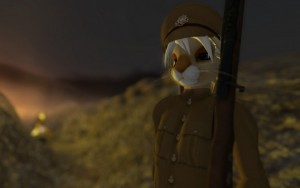 Canberra region films were screened and fared well, with “The White Feather” taking out Best Young Persons in Film Award. The filmed song “100 Years” by John and Elisabeth Dykstra from “The Berrys” were present to accept the award for Best Music/Sound.

Best Film from a Film School, University or College and Best Film Student Award went to “Haircut” the US short about the first class of female cadets accepted into military service academies.

An unusual inclusion was “Dad’s Fragile Doll” from Iran, which won Best Animation. Directed by Ali Zare Ghanat Nowi, the film shows a young girl reconstructing events leading to her father’s imprisonment and execution using dolls her mother has made.