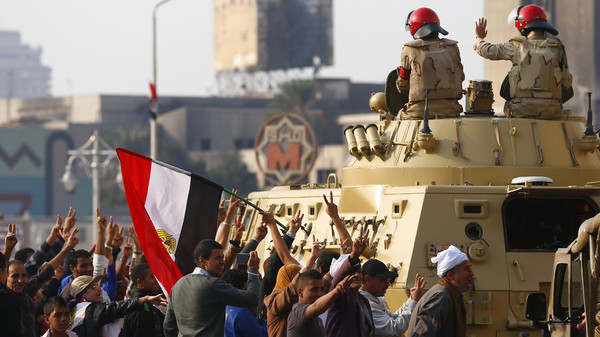 A group of activists in Egypt is challenging the country’s mandatory military service for men, demanding that it be amended to allow women the right to serve on a voluntary basis.

While Egyptian women have served in the military for decades, their roles have been limited to administrative and medical posts.

The group launched a campaign and has held demonstrations earlier this month calling for establishing female military academies and opening the door for voluntary military service for women.

“We are demanding that we receive military education to be prepared in case of emergencies,” the 18-year-old sociology student told Al Arabiya News in a telephone interview.

Komy said that it was inspiring to see Maj. Mariam al-Mansouri, the first female Emirati pilot, take part in air strikes against militants belonging to the Islamic state of Iraq and Syria (ISIS) last June.

“We have girls that can follow in the steps of Mariam al-Mansouri,” she said. “We love our country and we want to do something for it.”

Komy said there was some limited support for her group’s proposal when the issue is brought up. The group’s Facebook page has more than 12,000 likes.

But the whole concept remains strange and impractical for many.
“Some people keep telling me it’s impossible but we can make the impossible possible.”

Komy suggested women could join the military on a voluntary basis and could stay in segregated accommodations and facilities.

“We voiced our request to the Defense Ministry and we’ve requested to meet President Abdel Fattah el-Sisi to convince him of our idea,” she said.

“Several military officials told us that they like our spirit but the concept was impractical,” she added.

Women have fought alongside men throughout history but their participation in some nation state militaries in the Middle East remains a thorny subject.

Saeed Sadek, an Egyptian political sociology professor, said extending military service to female Egyptians was not necessary due to the high number of male soldiers.

In Egypt, males between the ages of 18 and 30 must enroll in the military, which is thought to be largest among Arab countries.
Sadek explained that Israel had a compulsory military service for both sexes because of a low male population.

He said the proposal to extend military service to women could be viable in the event there was a shortage of males.

Speaking of a variety of roles that women could serve in the military, Sadek said women could play support roles such as in electronic warfare, intelligence roles and in interrogating female prisoners.