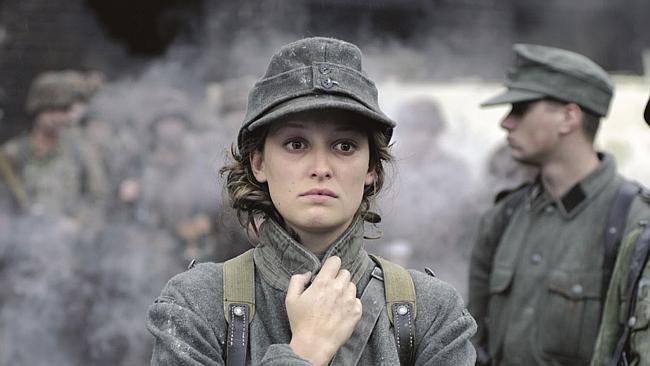 There are so many (some would argue: too many) portrayals of World War I on television this week that a movie about World War II seems oddly like a respite.

Downfall (Saturday, 8.35pm, SBS One) is partly based on the book Until the Final Hour by Traudl Junge, a secretary to Adolf Hitler, played here by Alexandra Maria Lara.

Lara impressed in Francis Ford Coppola’s Youth Without Youth (2007) — a favourite film of mine — and starred in The Reader (2008) and 2013’s Rush with Chris Hemsworth. It is through her eyes that we witness the final mad days of the Nazi regime, with Hitler played by Bruno Ganz. It is a brilliant film, but best known for the famous scene where Hitler screams at his generals for minutes on end, with his ranting and raving audible through the concrete walls of his bunker. It has been the subject of countless online parodies on YouTube, with people supplying their own subtitles (generally, it must be said, political functionaries trying to anonymously slander their opponents).

Another film known for a single climactic scene is 1992’s A Few Good Men (Monday, 9.30pm, One), and naturally I refer to the “you can’t handle the truth” courtroom scene.

The film follows the court martial of two marines charged with the murder of a fellow marine, after a hazing incident gone wrong. I daresay the film also introduced to most people the fact the US maintained a naval base at Guantanamo Bay in Cuba, long before the war on terror made it notorious.

On a lighter note, there is a category of Hollywood comedies that speak to the human condition in profound ways, perhaps even more so than many the many earnest dramas that try to do so explicitly.

Groundhog Day with Bill Murray is one example — an existential masterpiece if ever there were one. The Truman Show (Tuesday, 9.30pm, 11) starring Jim Carrey is another.

Directed by Peter Weir and nominated for three Oscars, it tells the story of Truman Burbank (Carrey), a man who is unaware that he is living in a constructed reality television show, broadcast 24/7 to billions of viewers. Eventually he begins to get suspicious and embarks on a quest to discover the truth about his life.