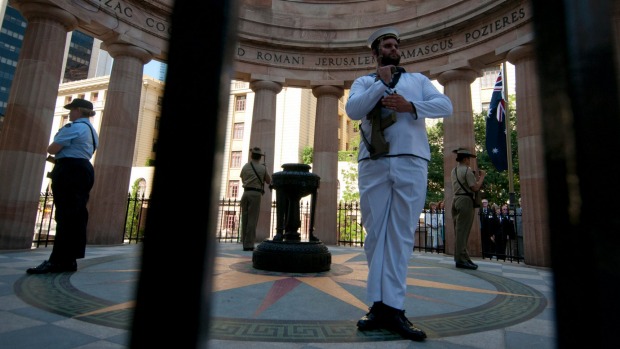 After more than seven months in the shadows, Brisbane’s eternal flame has returned to its rightful location, taking pride of place at the city’s Shrine of Remembrance.

The flame was moved from its position as the centre point of the shrine last July, to allow for a $13.6 million restoration in the lead-up to the Anzac Day centenary next month.

In the meantime, the flame had occupied a quiet corner of Anzac Square, down a flight of stairs and in the shadow of the Shrine of Remembrance.

That was until Saturday, when a small crowd watched as defence personnel relayed the flame back to the shrine, a journey of about 25 metres.

Premier Annastacia Palaszczuk said the flame’s return signalled the completion of a significant part of the restoration work.

“Today really marks the culmination of hard work and dedication of workers to make sure this shrine is restored to its rightful place here in Anzac Square,” she said.

“…I can remember coming here as a young girl, as a three-year-old, my mother would bring me here.

“We would sit here and look at the Shrine of Remembrance and (the flame) now is restored to its rightful place – a place of reflection, a place where families can come, pay their respects and think about those people who made the ultimate sacrifice.”

Before the ceremony, Lord Mayor Graham Quirk said the restoration should hold the Shrine of Remembrance in good stead for at least 100 years.

“Since Governor (Sir John) Goodwin stood here in 1930 on Remembrance Day and lit the eternal flame, this shrine of remembrance has been a place where people have come to respect all of those who have made sacrifice in our nation’s interests,” he said.

“So, today, we again pay that respect to those who have fallen, those who have served, because this restoration will ensure that our shrine of remembrance will be here for at least another 100 years in the future in this restored state.”

Cr Quirk said it was a “mini-City Hall” project, referring to the $215 million restoration of City Hall, which was completed in 2013.

“This Shrine of Remembrance was of course built around the same time (as City Hall) and concrete was not then what it is today,” he said.

“What we’ve done is to undertake a lot of work in the membrane of this particular structure, making sure … the drainage work is complete and that the whole restoration is undertaken.”

Cr Quirk said he expected a bumper crowd at Anzac Square on April 25 for the centenary commemoration.

“It will be a wonderful commemoration of the 100th anniversary of the landing at Gallipoli by the Anzacs, so it will have a special significance,” he said.

“I am sure, with that, we will see a very special crowd that gathers as well, a much bigger crowd.”

About $11.4 million of the Shrine of Remembrance’s $13.6 million refurbishment bill was paid by the state government, with the difference paid by the council.