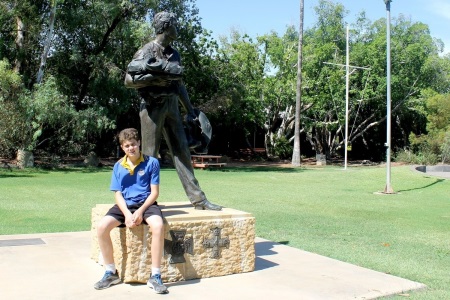 THE experience of a lifetime awaits Blackall schoolboy Bayley Williams on the Gallipoli Peninsula on Anzac Day next year, as one of 70 Queensland students named today as winners of the Premier’s Anzac Prize.

As well as Turkey, the group will tour Belgium and France for two weeks from April 22, visiting locations on the Western Front as part of historic Anzac Centenary commemorations.

“I feel very honoured to be selected to participate in the Anzac centennial tour,” 13-year-old Bayley said.

“I’ve always wanted to learn more about what our soldiers went through.”

He got the opportunity to participate after making a multi-media presentation exploring how the Anzac tradition has shaped Australia, why it’s still important and how future generations can keep the tradition alive.

The erection of a bronze statue in the town’s Memorial Park in recent years helped bring the Anzac legend close to home for Bayley, whose father, Les Williams has already visited Gallipoli twice as the operator of a military antiques business.

“I found my visits very moving and I know it will be a memorable experience for Bayley,” Les said.

Premier Campbell Newman and Minister for Education John-Paul Langbroek said he and students from across Queensland would benefit from the opportunity to immerse themselves in the spirit of Anzac.

“The Anzac story is so important to Australia and we’re excited that these students will be able to learn more about it in this way,” Mr Newman said.

“It will be a unique experience and honour for these students and chaperones to stand on the Gallipoli Peninsula, 100 years to the day from when the Anzac soldiers landed.

“This tour will be a time they’ll never forget and one they can share with their families now and in years to come.”

2014 Premier’s Anzac Prize winner Ms Tiffanie Turnbull said the tour was an invaluable, once in a lifetime opportunity and encouraged this year’s recipients with advice on how to make the most of their time overseas.