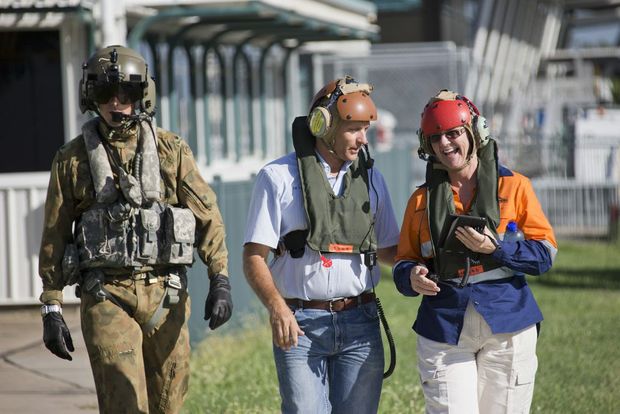 IN THE wake of Tropical Cyclone Marcia, Rockhampton’s Mayor Margaret Strelow walked across the city’s airport tarmac with her deputy to join Brigadier General Roger Noble and the waiting MRH-90 Taipan for an aerial inspection of the destruction.

What they saw brought the mayor to tears, particularly as they flew over the city’s Botanic Gardens, established 146 years earlier and hailed as one of the best in Australia.

“All the bunya pines were still on the ground and as we flew towards Byfield you could see the route the cyclone took as it bee-lined for Rockhampton.

“We used to believe a cyclone couldn’t get across the mountains but Marcia didn’t get that memo.”

With the 100th anniversary of Gallipoli just two months away, Cr Strelow believed the ceremony for up to 15,000 people at the gardens’ cenotaph would now be impossible.

But then Brigadier General Noble stepped into the discussion and as a result volunteered the Australian Defence Force for the rescue mission.

“The ADF believed the Botanic Gardens wasn’t part of their brief, but when they saw the cenotaph and heard we couldn’t have Anzac Day there, they took it on,” Cr Strelow said.

“Because this is the centenary year, they intuitively understand the importance of it to us… to Brigadier General Noble and to the defence forces, it became a badge of honour that they would return access in time for Anzac Day.”

The 3rd Combat Engineer Regiment went a step further and began clearing paths in every direction around the cenotaph, beating their way through the fallen trees to find it standing, untouched.

Cr Strelow said there was still work to be done but the ADF had done a mighty job to make the Anzac Day event possible.

On April 25, a significant number from the ADF Townsville contingent will return to Rockhampton to celebrate the day in the city.

“They played such a significant role in taking on the Botanic Gardens,” Cr Strelow said.

“We could not have done it otherwise… it would have been a slow recovery.”

Via: The Morning Bulletin