Anzac Cove invasion of the surfboat a poignant tribute to Gallipoli 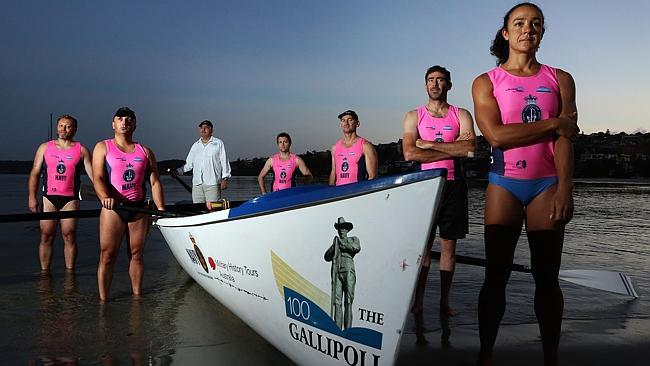 ONE hundred years on from the Gallipoli landing, scores of young Australians and New Zealanders will again descend on Anzac Cove in surf boats not much different to the dories that carried the brave Diggers in 1915.

In a poignant tribute to their fallen forbears, surf club crews from Australia, New Zealand and Turkey will compete in a two-day race beginning on April 21, travelling down the Dardanelles, through the Aegean before finishing at Anzac Cove.

“Their sacrifice set up Australia to what it is today and I’m proud and humble to be an Australian and more so because of their sacrifice,” said Paul Cooper of Sydney’s North Bondi Surf Life Saving Club.

Looking to honour that sacrifice is what drove Mr Cooper and a couple of mates who love surf boats to organise the tribute, known as the Gallipoli 100, and backed by Australian Surf Rowers League.

“The guys back then still had surf carnivals and life-saving events during war campaigns,” Mr Cooper said. “Modern surf boats are an extension of the dory which they used to land on the beaches and we thought what better thing to do than to have an anniversary lead-up event.

“Guys in surf life saving love adventure, so why not have a forerunner … all of our ideas are to reinforce attention to the significant event on the 25th.”

In the past week, after close to nine years of planning, the distinctive surf boats from clubs around Australia have been shipped to Turkey ahead of the April event.

One of Mr Cooper’s mates is fellow sweep Paul Murphy, who is the director of Military History Tours.

Since 2012, they’ve been travelling to Turkey, planning the event and taking Australian teams over to help train Turkish crews to row surfboats on the Black Sea. “We knew the Turks could row — they compete all over Europe in skulls,” Mr ­Murphy said.

Each boat will have at least two crews for the three-leg race and many are adorned with the names of the fallen.

Burning Palms SLSC, on the NSW south coast, will carry the names of 31 young men who ­enlisted from the inland town of Goulburn.

Mr Murphy said the links ­between surf life saving and the military was an “incredible tie-up”. “If you were a member of the surf club in 1914 and said you wanted to join up — because of the commitment and the training — you were signed up as at least a corporal or a sergeant … in some cases they became lieutenants ­because we didn’t have an army.”

The red and yellow flags used on the beaches today are a result of the influence of returning Diggers, as they were used to signal to ships for supplies or reinforcements, Mr Murphy said.

After the event, the surf boats will be donated to the United Kingdom Surf Rowers League to be distributed across Europe to clubs in need.