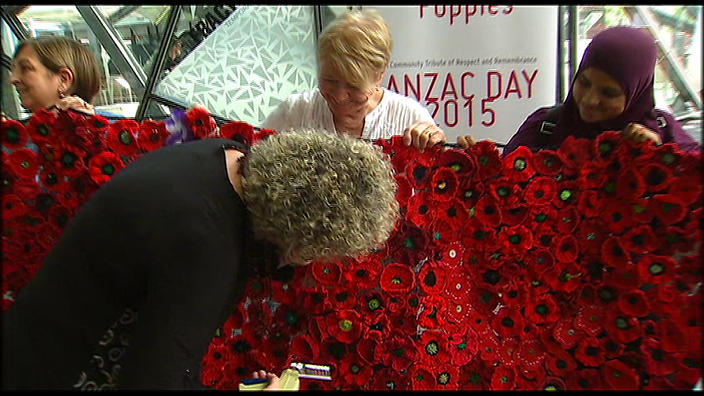 Two Victorian sister-in-laws who asked crafters to help hand make 5,000 poppies as part of a project to commemorate the Anzac centenary say they are stunned to have received around 250,000 from around the world.

The 5000 Poppies initiative has its roots in a family project.

A small army of volunteers now faces the daunting task of attaching the blooms one by one to dozens of panels before Anzac Day, when they will carpet part of Melbourne’s Federation Square as a touching tribute to all those killed in war.

Artists Lynne Berry and her sister-in-law Margaret Knight decided to make 120 poppies for a tribute to their fathers who fought in Europe and New Guinea during WWII.

Friends and even strangers loved the idea and wanted to get involved.

In mid-2013 the pair set crafters what seemed at the time the challenging task of making 5,000 poppies to create a field of blooms as a community tribute to more than a century of service by Australian servicemen and women.

Schools, libraries, RSLs and community groups around the nation were among those who embraced the challenge.

To the artists’ shock they have received around 250,000 poppies. 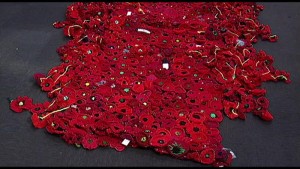 “We’ve got poppies from all sorts of places”, said Ms Berry.

“From Malta. China. Singapore. New Zealand. The Celtic Isles. Sweden. Belgium. France. From many, many countries.”

Some are knitted, others crocheted, felted or sewn.

Age has not been a barrier to people getting involved.

Contributors have been as young at 2-years old, right through to 106.

“It’s such a simple project to get involved with. You don’t need much skill to make a poppy”, said Ms Berry.

“I think most people want to be involved in something that is a significant tribute to Australia’s men and women that fought for us.”

Young people in Turkey crafted over 200 flowers in partnership with JCI Australia.

The president of the not-for-profit organisation that encourages active citizenship said taking part fostered better understanding between youngsters from the two countries.

“My Turkish friends believe that building a very strong friendship is very important,” she Suzi Chen.

“And they also want to commemorate to this event and also promote world peace.”

Clients and staff at Australian Croatian Community Services in Melbourne got involved.

“We have an emotional connection with the poppies because most of our clients and workers actually have a connection with war unfortunately,” said Community Liaison officer Senada Ekic.

“We made them to raise awareness there are no winners in war.”

Ms Berry is leading a team of volunteers in Melbourne delicately attaching the poppies to metres of netting.

About 80 net panels measuring 10 metres long by a metre wide will be carefully laid in Federation Square on April 25, when Australians commemorate the Anzac Centenary.

There are plans for the project to tour the country and to ultimately gift it to the Australian War Memorial in Canberra.