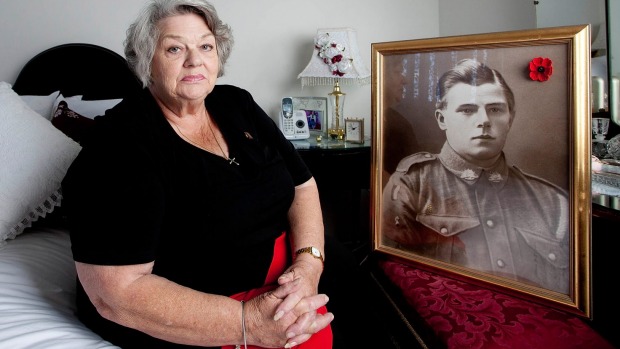 Discovering the Anzac records on the Ancestry website will be fascinating reading.

When Dawn Dudkowski was growing up, she would beg her grandfather to tell his war stories over and over.

And some rippers did he have.

After missing the battle of Gallipoli due to dysentery, Thomas Ralph Tipton Brian, born in South Yarra 17 years before, went to fight in France.

It was there he duped death when a tiny stainless steel mirror kept in his breast pocket caught the direct impact of a piece of shrapnel.

“He had that mirror until the day he died,” Dawn said.

She describes her grandfather, a railway worker, as strong, solid and reliable, but also an “absolute larrikin” and “vain”.

Perhaps it was this last quality that saved his life, she does not know.

Other stories took on a new meaning as she grew older, such as Thomas watching “the best mate he ever had” die in the trenches on the Somme.

“Every time he told that story … this big tough man, he would just cry,” Dawn said.

The death of her “hero” in 1995 inspired Dawn to begin researching both sides of her family’s history.

She discovered her mother’s ancestors fought in the Battle of Hastings in 1066 and pictures of men from her father’s side in the Australian War Memorial. She was “hooked”.

In time for the Anzac Centenary, family history website Ancestry and the National Archives of Australia are on Monday making available more than 12 million Anzac military records online.

It will include the personal service dossiers for those who served during WWI in the Australian Imperial Force, Australian Flying Corps and Australian Army Nursing Service.

“This collection is our first significant Australian WWI collection,” he said.

“It’s the first of many significant collections we’ll be taking to the community with the National Archives of Australia.”

Mr Mercer said the records would help shed light on Australia’s war history, including critical events such as the Battle of Fromelles in which Dawn’s grandfather was a casualty.

Dawn, who will be taking part in the dawn service at this year’s special Anzac Day celebrations, said she could not wait to trawl through the new records.

The new records are behind a paywall.